(All materials on this page reproduced from NFPA’s website, www.nfpa.org/publiceducation. © NFPA.)

According to the National Fire Protection Association, the top fire causes are


Your ability to get out of your home during a fire depends on advance warning from smoke alarms and advance planning.

Fire can spread rapidly through your home, leaving you as little as one or two minutes to escape safely once the smoke alarm sounds. A closed door may slow the spread of smoke, heat and fire. Install smoke alarms in every sleeping room and outside each separate sleeping area. Install alarms on every level of the home.

Pull together everyone in your household and make a plan. Walk through your home and inspect all possible exits and escape routes. Households with children should consider drawing a floor plan of your home, marking two ways out of each room, including windows and doors.


It’s important to have enough smoke alarms in your home. Fire research has demonstrated that with today’s modern furnishings, fires can spread much more rapidly than in the past when more natural materials were used. Because of this, having a sufficient number of properly located smoke alarms is essential to maximize the amount of available escape time. For many years NFPA 72, National Fire Alarm and Signaling Code, has required as a minimum that smoke alarms be installed inside every sleep room (even for existing homes) in addition to requiring them outside each sleeping area and on every level of the home. (Additional smoke alarms are required for larger homes.) Homes built to earlier standards often don’t meet these minimum requirements. Homeowners and enforcement authorities should recognize that detection needs have changed over the years and take proactive steps make sure that every home has a sufficient complement of smoke alarms.

If you need assistance in obtaining a smoke alarm for your residence, the Red Cross Home Fire Campaign may be able to help!


Often called the invisible killer, carbon monoxide is an odorless, colorless gas created when fuels (such as gasoline, wood, coal, natural gas, propane, oil, and methane) burn incompletely. In the home, heating and cooking equipment that burn fuel are potential sources of carbon monoxide. Vehicles or generators running in an attached garage can also produce dangerous levels of carbon monoxide.

The dangers of CO exposure depend on a number of variables, including the victim's health and activity level. Infants, pregnant women, and people with physical conditions that limit their body's ability to use oxygen (i.e. emphysema, asthma, heart disease) can be more severely affected by lower concentrations of CO than healthy adults would be.  A person can be poisoned by a small amount of CO over a longer period of time or by a large amount of CO over a shorter amount of time.


CO enters the body through breathing. CO poisoning can be confused with flu symptoms, food poisoning and other illnesses. Some symptoms include shortness of breath, nausea, dizziness, light headedness or headaches. High levels of CO can be fatal, causing death within minutes.

The concentration of CO, measured in parts per million (ppm) is a determining factor in the symptoms for an average, healthy adult.


A portable fire extinguisher can save lives and property by putting out a small fire or containing it until the fire department arrives; but portable extinguishers have limitations. Because fire grows and spreads so rapidly, the #1 priority for residents is to get out safely.
Fire extinguishers are one element of a fire response plan, but the primary element is safe escape.

Fire sprinklers have been around for more than a century, protecting commercial and industrial properties and public buildings. What many people don't realize is that the same life-saving technology is also available for homes, where roughly 80 percent of all civilian fire deaths occur.


Watch these short videos from the National Fire Protection Association (NFPA) with your children and discuss how to improve fire safety in your home.

Making a home fire escape plan
I Spy Cooking safety
I Spy Fire Safety
Look, listen and learn with Simon to discover more about fire safety
Look for places fire could start
Learn 2 ways out of every room
Listen for the sound of the smoke alarm 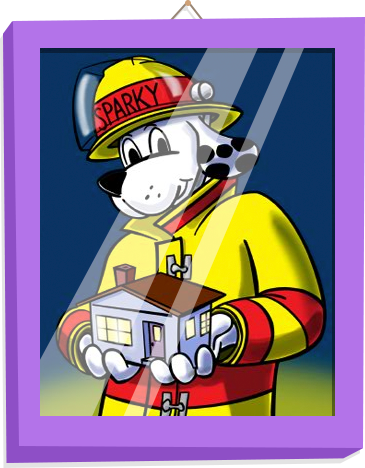 If you have additional questions about fire safety, please feel free to call the Fire Department at 715-395-1680.