Learn about Superior streams and how you can be part of the solution to stormwater pollution! 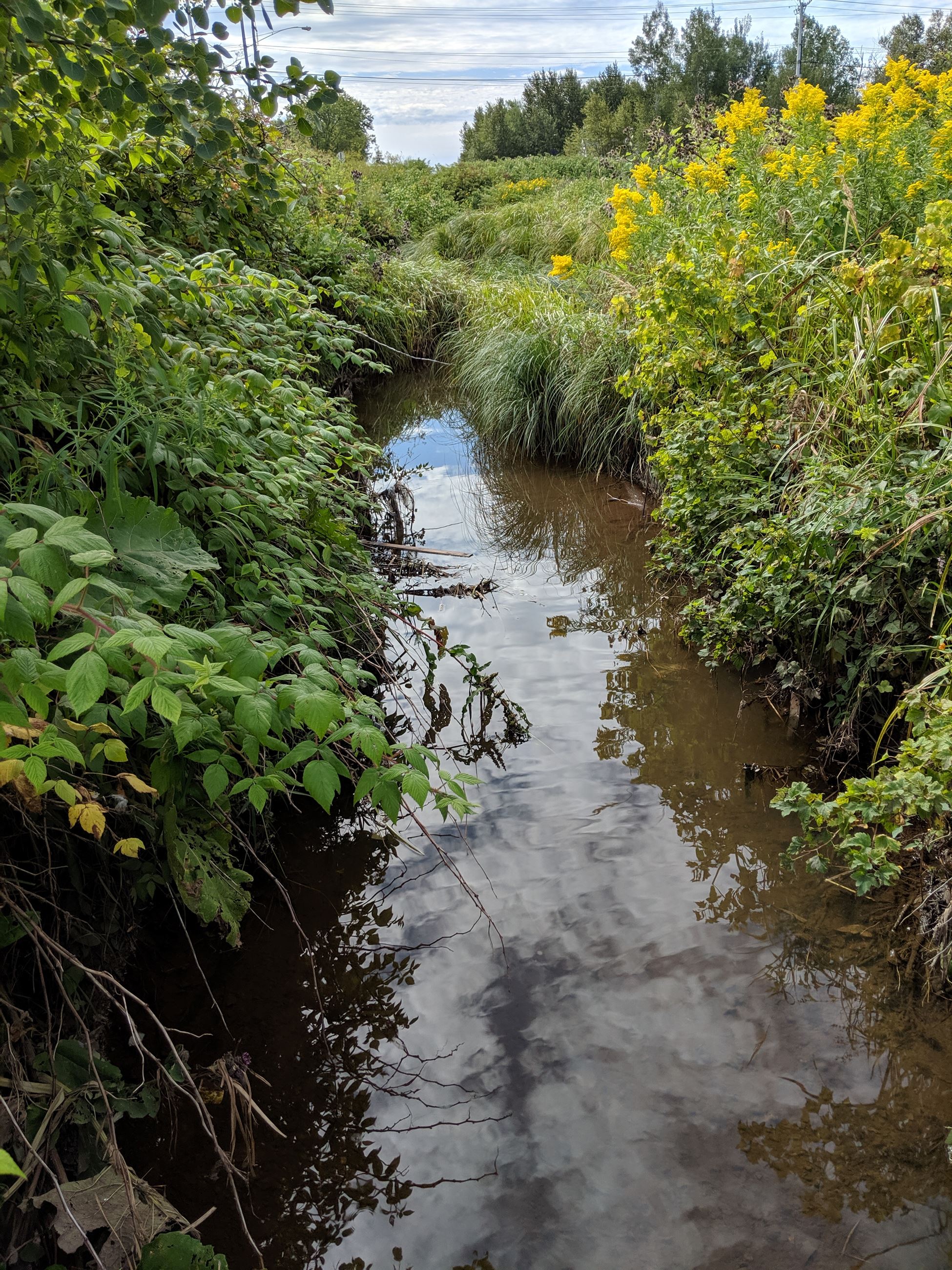 en Stream Monitoring Program (SCSMP) was developed in collaboration with the WI DNR and WI Extension’s Water Action Volunteer program. The SCSMP program combines the first-hand knowledge and interest of citizens with the technical expertise of local water resource specialists. Individual citizens, families, environmental groups, students, and other volunteer organizations who want to learn about and improve the quality of local streams are encouraged to participate!

Volunteers will sample Faxon Creek, pictured right, an urban stream that runs through the City of Superior (SW to NE) starting in Heritage Park flowing to Superior Bay.

All volunteers will receive the equipment, expert training, and oversight necessary to successfully sample the stream. We ask that volunteers commit to sampling once a month for a minimum of one season (approximately April-Oct.).

The program was established in 2018, and each year stream sampling begins in the spring in Faxon Creek Watershed. Faxon Creek is the only Superior stream completely contained within the city limits (learn more about Faxon Creek here).

Each of the water quality parameters studied as part of the program can be linked to urban living and stormwater run-off. Learn more about each metric below or on the Water Action Volunteers or LakeSuperiorStreams.org websites! 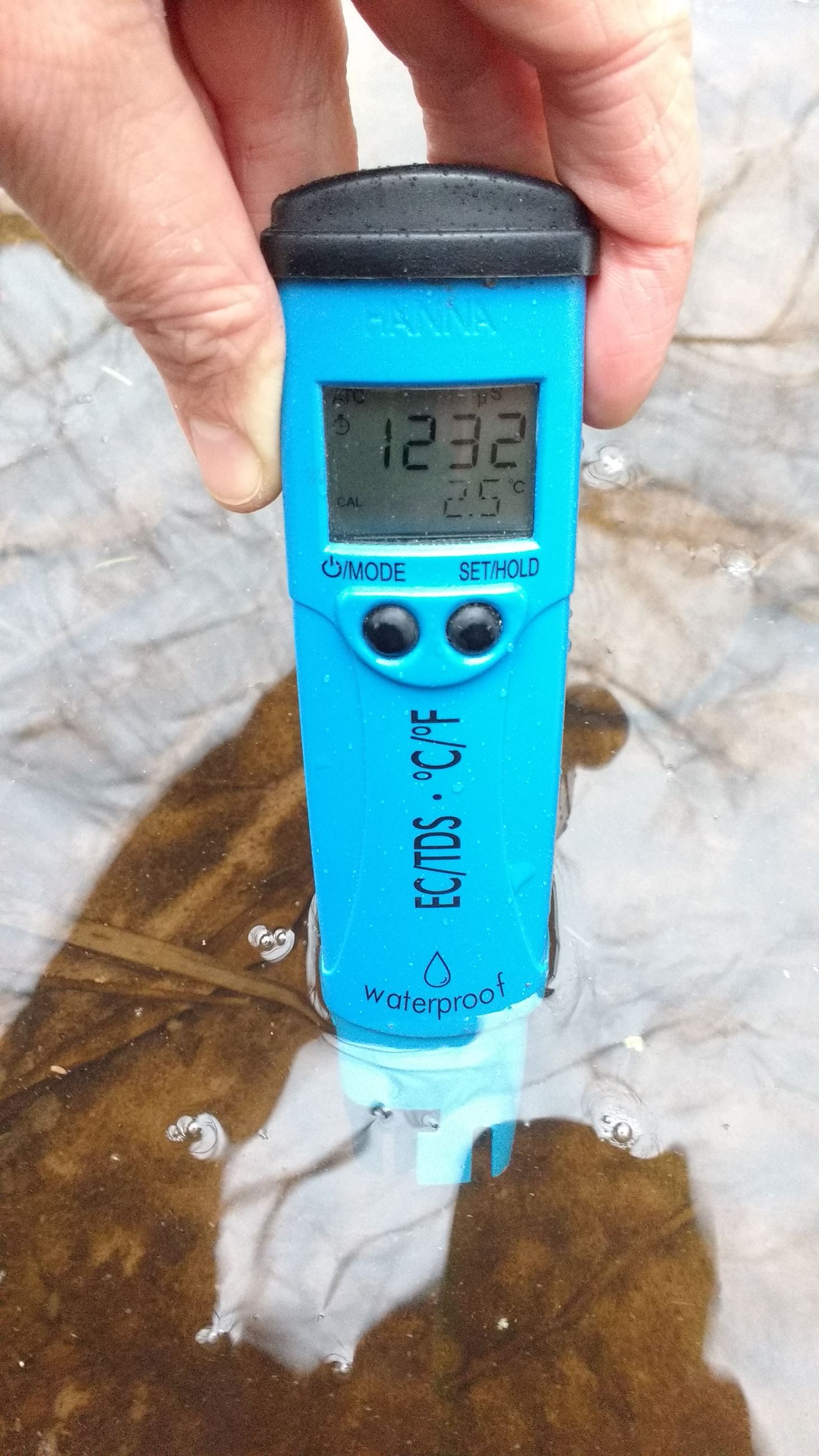 Temperature, measured in degrees Celcius: Besides being important to swimmers and anglers, most aquatic organisms are poikilothermic - i.e., "cold-blooded" - which means they are unable to internally regulate their core body temperature. Therefore, temperature exerts a major influence on the biological activity and growth of aquatic organisms. To a point, the higher the water temperature, the greater the biological activity. Fish, aquatic insects, zooplankton, and other aquatic species all have preferred temperature ranges. As temperatures get too far above or below this preferred range, the number of individuals of the species decreases until finally there are few, or none. For example, we would generally not expect to find a thriving trout fishery in ponds or shallow lakes because the water is too warm throughout the ice-free season. In particular, warm water impairs their reproduction- trout eggs need cool, well-oxygenated water to develop properly, but it may also directly stress adult fish.

Temperature is also important because of its influence on water chemistry. The rate of chemical reactions generally increases at higher temperatures, which in turn affects biological activity. Warmer temperatures increase the solubility of salts in water but decrease (just the opposite !) the solubility of gasses in water. Warm soda pop going flat is an example of this effect. Another important example of the effects of temperature on water chemistry is its impact on oxygen. Warm water holds less oxygen than cool water, so it may be saturated with oxygen but still not contain enough for the survival of aquatic invertebrates or certain fish. Some compounds are also more toxic to aquatic life at higher temperatures. You can find more information about measuring water temperature at the Water Action Volunteers methods webpage. 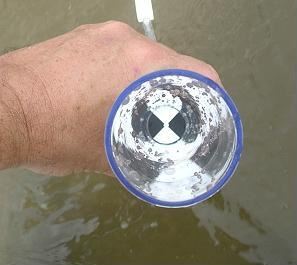 Transparency, measured in centimeters: Transparency is a water quality parameter that refers to how clear (or conversely, how muddy) the water is. The greater the amount of total suspended solids (TSS; also called total suspended sediment) in the water, the murkier it appears, and the lower the measured transparency. Clay, silt, and sand from soils, phytoplankton (suspended algae), bits of decaying vegetation, industrial wastes, and sewage are common suspended solids. Measuring transparency in streams is extremely important as an indicator of the concentration of suspended sediments in the water. Sediments are a natural part of streams and other water bodies and even the most pristine streams in undeveloped watersheds will run muddy during high flows. However, excessive sedimentation in streams and rivers is considered to be the major cause of surface water pollution in the U.S (38% of stream miles) followed by pathogens at 36%, and nutrients at 28%.

Decreased transparency affects a stream and the organisms that live in it in many ways and if the water becomes too turbid, it loses the ability to support a wide variety of plants and other aquatic organisms. Suspended solids may cause the watercolor to darken thereby reducing the amount of light available for aquatic vegetation, algae, and mosses to grow by photosynthesis. Reduced plant matter means less food and habitat for herbivorous organisms such as snails, insects, and juvenile fish. As photosynthesis slows, less oxygen is released into the water during the daytime and the plants may even die. Another negative effect of increased TSS is that turbid waters usually become warmer because suspended solids darken the water and absorb more heat from sunlight. Fine particulate sediment can also have purely mechanical effects by clogging sensitive fish and insect gills, abrading soft tissues and scouring algal and microbial "mats" growing on rocks. For more information about transparency, visit Water Action Volunteers methods webpage. 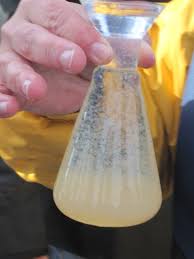 Dissolved Oxygen, measured in mg/L or % saturation: Like terrestrial animals, fish and other aquatic organisms need oxygen to live. As water moves past their gills (or other breathing apparatus), microscopic bubbles of oxygen gas in the water, called dissolved oxygen (DO), are transferred from the water to their blood. Like any other gas diffusion process, the transfer is efficient only above certain concentrations. In other words, oxygen can be present in the water, but at too low a concentration to sustain aquatic life. Oxygen also is needed by virtually all algae and all macrophytes, and for many chemical reactions that are important to lake functioning.

You can find more information about measuring DO at the Water Action Volunteers methods webpage. 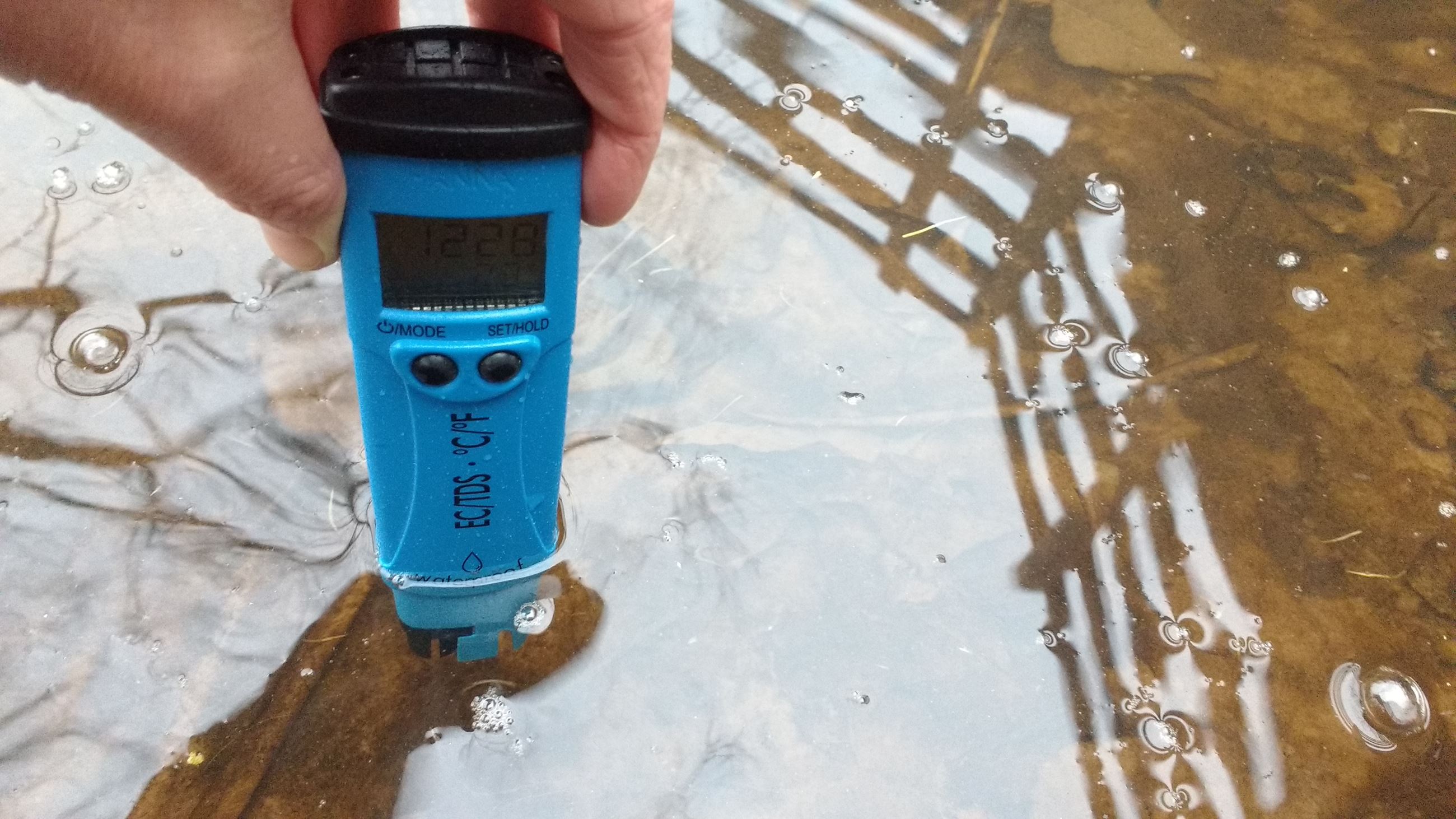 Specific Electric Conductivity (EC25), measured in uS/cm (micro siemens): Water is called the universal solvent because of its ability to dissolve so many substances. As water moves across the rocks and soils in a watershed, and then down the stream channel it picks up a variety of dissolved and particulate materials. The major direct concern associated with high dissolved salt concentrations relates to direct effects of increased salinity on the health of aquatic organisms.

CrowdHydrology uses "crowdsourcing" to gather as much stream height data as possible. We make it easy for people to send us data—no special apps or technologies should be necessary. And you don’t have to be signed up as a stream monitor to participate. The City of Superior has one CrowdHydrology site on Faxon Creek, in Central Park. Stop by, look for the informational sign on the walk bridge (see example below), and send us some stream data!

There’s a simple, 3-step process to send the water level data to the CrowdHydrology database.

CrowdHydrology is an experiment currently being run by Dr. Chris Lowry at the University at Buffalo Department of Geology and Dr. Mike Fienen at the U.S. Geological Survey. 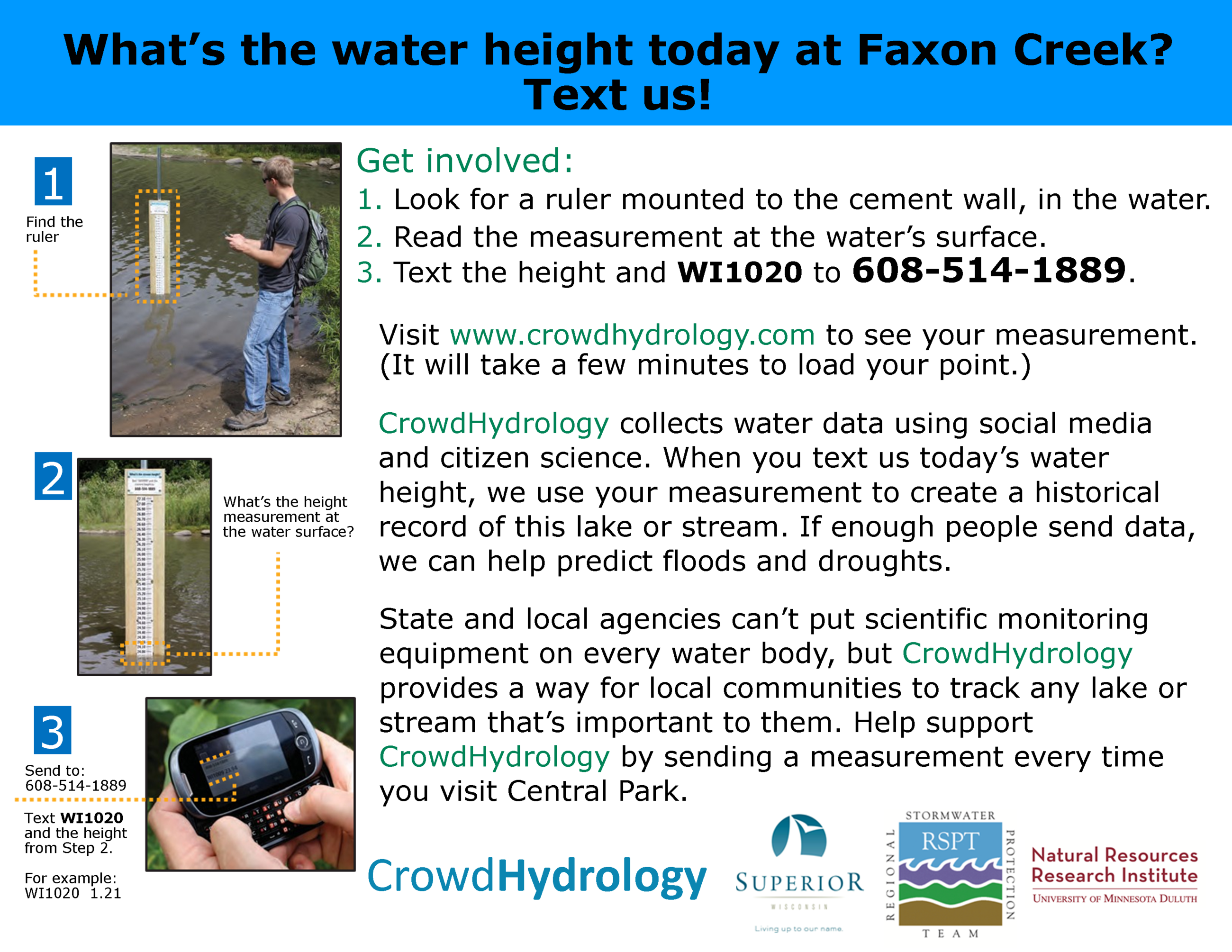