The Wisconsin Department of Transportation (WisDOT), in coordination with the City of Superior, is proposing improvements at the intersection of WIS 35 (Tower Avenue) and WIS 105 (Central Avenue). 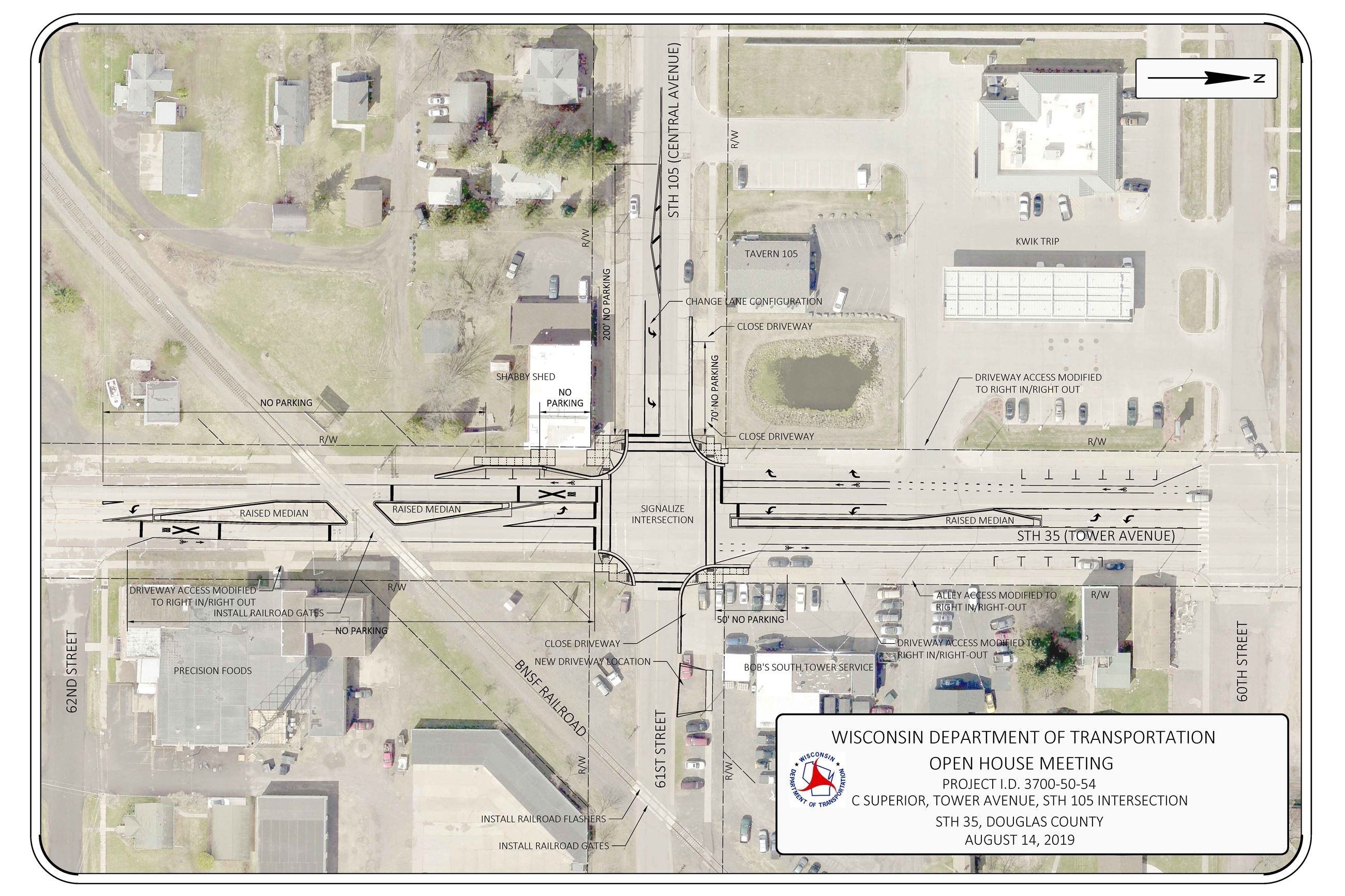 The Wisconsin Department of Transportation (WisDOT), in coordination with the City of Superior, is proposing improvements at the intersection of WIS 35 (Tower Avenue) and WIS 105 (Central Avenue).

The following needs have been identified:

Safety:  Currently, there is a trend of angle crashes at this intersection, indicating side road traffic may have difficulty finding gaps in traffic to safely cross or turn onto WIS 35. In order to provide safe and efficient passage, these safety concerns must be addressed.

Capacity: The westbound approach to the intersection is forecasted to operate at the lowest possible level of service (F = forced or breakdown flow) in the design year. For purposes of efficiency, this level of service must be improved.

A recently built Kwik Trip gas station in the northwest intersection quadrant has increased traffic volumes and amplified existing safety and capacity concerns. Eliminating these concerns will improve the economic health of the Kwik Trip.

Proposed improvements include signalization of the intersection, construction of median islands, and reconfiguration of lanes.  Other improvements included with the project are reconstruction of sidewalk curb ramps in all quadrants, installation of railroad gates and arms, and the addition of two parking spots on WIS 35.  Impacts of the project include access modifications due to median construction, driveway relocation, and elimination of parking spots.

The environmental documentation is currently underway and should be complete by September 2019.

Construction is currently scheduled to begin in Mid/Late August 2020.  During construction, work along WIS 35, WIS 105, and 61st Street will be completed under staged construction using single lane closures, lane shifts, and shoulder closures. Turn lanes along WIS 35 may be closed during staging, but one approach lane will be provided during all stages of construction on all legs of the intersection.

Pedestrian facilities will always remain open during construction. Curb ramps will be replaced in all four quadrants of the intersection. Only one curb ramp is to be closed at a time to minimize pedestrian impacts. Additionally, there are other pedestrian crossings within 0.1 miles of the project intersection.

Two vacant driveways will be removed, one driveway will be relocated, and several accesses will be modified to right-in/right-out.  WisDOT has contacted affected homeowners and businesses.

Construction is currently scheduled for completion in Early/Mid October 2020.